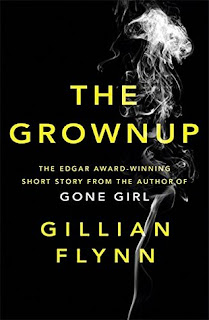 Synopsis :  A young woman is making a living, faking it as a cut-price psychic working at Spiritual Palms (with some illegal soft-core sex work on the side). She makes a decent wage - mostly by telling people what they want to hear. But then she meets Susan Burke. Susan moved to the city one year ago with her husband and 15-year old stepson Miles. They live in a Victorian house called Carterhook Manor, built in 1893. Susan has become convinced that some malevolent spirit is inhabiting their home, and taking possession of the stepson. She has even found trickles of blood on the wall. The young woman doesn't believe in exorcism or the supernatural, but she does see an opportunity to make a lot of money. However when she enters the house for the first time, and meets Miles, she begins to feel it too, as if the very house is watching her, waiting, biding its time....

The Grownup which originally appeared as What Do You Do? in George R. R. Martin's Rogues anthology, proves once again that Gillian Flynn is one of the world's most original and skilled voices in fiction.

If I'm completely honest, I wasn't expecting a lot from this book simply because it's so short but my god I was wrong not to expect a lot. This book was sooooo good.

It follows a woman who is basically a hooker whilst also faking being a psychic. When a woman walks in seeking help,  the protagonist of this book (who we are not given a name for) sees it as an opportunity to take advantage of the situation and make a lot of money. However she does not know what she's getting herself into.

Personally any book from Gilliyn Flynn is always going to be a winner. They always stay with me a long time which shows how gripping her stories are. This book had a great deal of suspense and detail especially for the shortness of the book. The only reason I didn't rate it 5 stars is simply because I wanted more!!

If you haven't read a Gillian Flynn book before I highly suggest you do. Her writing is great and her stories are so gripping and this book was nothing less than that. The few little twists that this book made were not expected either (at least not by me) but now looking back it was actually pretty obvious.

The ending of this book was absolutely great. It left me as the reader on a huge cliffhanger of wondering what is going to happen next and what is the truth and what is lies? I feel most books have an issue making the book come to a good close however this book didn't seem to be an issue for me. I loved the whole knowing of what was real and what was fake concept and thought the protagonist was great at the end portraying that feeling. This book was just what I needed a easy light read with a lot of suspense!