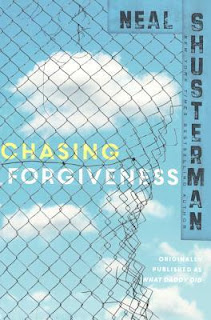 Synopsis  : A teen attempts to forgive the unforgiveable in this stunning novel ("VOYA") based on a tragic true story from the author of the "New York Times" bestselling Unwind dystology.

Preston Scott was only twelve years old when his father killed his mother. He never saw it coming. Despite his parents constant fighting, Preston always thought they were perfect together. He never dreamed his father would be capable of murder. Then again, who could ever predict something like this?

Fast forward: Preston is now fourteen. His father has just been released from jail and is moving near his grandparents house, where Preston and his younger brother Tyler have been living. His grandparents forgave his dad long ago for killing their daughter, and although Preston tries to feel the same kind of forgiveness, it s not easy: he ll never see his mother again, and yet, he still loves his father. How is that possible? Will Preston ever be able to reconcile his dueling feelings for his father, and move past this tragedy?

"Chasing Forgiveness "was originally published in 1991 as "What Daddy Did.""

I did not know until just over halfway through this book that it was based on a true story. From that I'm shocked. Not because of the story by any means I mean I'm not naive I know this shit happens all the time. However it just kind of stunned me that I hadn't known that or that it wasn't on the cover...

I finished this book a few minutes ago and if I'm honest I didn't really like it. I just found it to be boring and no real story line to it. It jumped through time periods like there was no tomorrow and therefore I felt as if the story didn't have time to develop and neither did the characters.

This book is told in there perspective of Preston who's mum was murdered by his dad when he was 12. It talks about the few months and days leading up to this happening and then when Preston is 14 and how he and his family are coping with their loss.

I appreciated the writing as it was of course meant to be told and written for the most part as a 14 year old boy would which in this case was done pretty well I feel. However I feel Preston and his brother and all the main characters were very repetitive with their personalities and their actions and words and it was just boring...
Posted by Chloe at 02:05