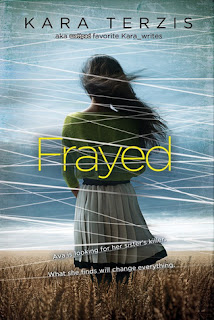 My therapist tells me I should write you a letter. Like flushing all my thoughts and feelings out of my system and onto paper. I tell her it's a stupid idea.

But here I am, writing a letter to a dead girl. Where do I start? Where did our story begin? From the moment you were born...or died?

I'll start with the moment I found out the truth about you. Your lies and my pain. Because it always begins and ends with you.
And that end began when Rafe Lawrence came back to town...

Ava Hale will do anything to find her sister's killer...although she'll wish she hadn't. Because the harder Ava looks, the more secrets she uncovers about Kesley, and the more she begins to think that the girl she called sister was a liar. A sneak. A stranger.

And Kesley's murderer could be much closer than she thought...

A debut novel from Wattpad award-winner Kara Terzis, Frayed is a psychological whodunit that will keep you guessing!

I was quite excited to get into this book. I had a little idea of what it was about, like I knew it was a girl who had lost her sister as she was murdered and it was about solving it but that was all. So I didn't have high or low expectations for this I just went in almost blind. But my god did I dislike this book. I'm sorry but it was just absolute shite!

I didn't feel like the story was going anywhere at all even though it was and the charcters just seemed so bland and boring it was awful. I think the book itself has potential and I also think the author could have something going for her considering I love the idea of the story and I also loved the story and letter combo. However ti did not fall through well in my eyes.

If you liked this book then that's great for you and I'm glad but unfortunately I was just hoping for something a little more. Maybe it's because I read this after absolutely loving the previous two books I had read (which was a start to the LUX series), but nevertheless I think that's no excuse for me to not enjoy a book.
Posted by Chloe at 05:53