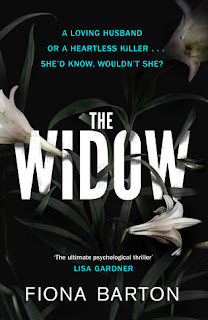 
We've all seen him: the man - the monster - staring from the front page of every newspaper, accused of a terrible crime.


But what about her: the woman who grips his arm on the courtroom stairs – the wife who stands by him?


Until he became that man accused, that monster on the front page. Jean was married to a man everyone thought capable of unimaginable evil.


But now Glen is dead and she’s alone for the first time, free to tell her story on her own terms.


Jean Taylor is going to tell us what she knows.

I found out about this book after browsing around Waterstones with my boyfriend and looking at new releases within this genre. I stumbled upon a book called 'The Child' by Fiona Barton and immediately knew it was going on my TBR shelf. So, anyway, I went home and had a nose of goodreads to see if the author had written anything else and just if there was any reviews on her new book. I then stumbled across this book which is her Debut Novel. I wasn't sure if I wanted to get it but I found out that the characters within her second book follow on from the first (two different stories that do not follow on from each other I might add). Me being me, I had to get the first and read that before I read The Child because I hate knowing some characters have already been introduced in another book earlier written, regardless if the story follows or not.

So this book is written in third person and is told from the perspective of 3 different people; The Detective, The Journalist, and The Widow. We are introduced later to another  two perspectives but I'll leave them for you guys to find out who, if you decide to pick this book up. The story follows a woman named Jean who at the very start of the novel we find out her husband has died (pointing out the obvious 'The Widow'). We also find out that her husband was accused of some sort of crime which then takes us back from 2010 (present), to 2006 (the past). The story unravels throughout the years as we join various characters on the journey of horrific crime that took place.

I was so excited to go into this book, I've been putting it off for quite a few weeks if not months but finally decided to pick it up. I did read a few reviews that said they couldn't engage with the story and didn't find it gripping enough, which kind of made me nervous to jump into this. However I'm so glad I did. I got through this so fast and probably could have read it within a day if I set my mind to it.

The characters in this book I really love and the story is something I really enjoyed. I can understand how people found it difficult to become engrossed with this book and the characters simply because of the way it is written but I think that;s the beauty of it. I kind of got the feel that I was there with the characters but observing what was happening, and I liked that aspect of it.

I will say I'm a little unsure how I feel about the ending which is the main reason for giving it a 4 star rating instead of 5. I guess that might be a little harsh but I felt like my feelings towards Glen was not how I was supposed to feel. I also really hated Jean all the way throughout this book, she just wasn't all there, almost like she had a split personality or something it was very odd, but it made the story!!!

Also one thing I had to note was, when I received the book in the mail and opened it there was a quote on the front from an author saying "A stunning psychological thriller. I devoured it in one sitting'. Then when I looked at who had said that I was so freaking psyched. M. J. Arlidge!! SO the fact one of my all time favourite authors said this made me so pumped to read this I can't even explain guys. Amazing feeling haha!!
Posted by Chloe at 04:12