After You by JoJo Moyes : Book Review 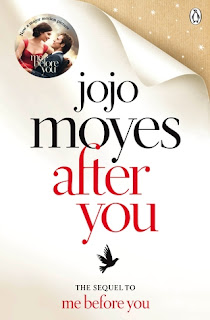 Synopsis  : How do you move on after losing the person you loved? How do you build a life worth living?

Louisa Clark is no longer just an ordinary girl living an ordinary life. After the transformative six months spent with Will Traynor, she is struggling without him. When an extraordinary accident forces Lou to return home to her family, she can’t help but feel she’s right back where she started.

Her body heals, but Lou herself knows that she needs to be kick-started back to life. Which is how she ends up in a church basement with the members of the Moving On support group, who share insights, laughter, frustrations, and terrible cookies. They will also lead her to the strong, capable Sam Fielding—the paramedic, whose business is life and death, and the one man who might be able to understand her. Then a figure from Will’s past appears and hijacks all her plans, propelling her into a very different future...

For Lou Clark, life after Will Traynor means learning to fall in love again, with all the risks that brings. But here Jojo Moyes gives us two families, as real as our own, whose joys and sorrows will touch you deeply, and where both changes and surprises await.

So of course After You is the sequal to Me Before You. If you haven't read Me Before You and are planning to or not sure then I suggest not reading this...

After Will takes his own life in Me Before You, Lou is left heartbroken and feeling lost and guilty of not being able to save him. She's had a hard time with people blaming her as well as Will's parents for being apart of it and allowing it to take place. This books follows the aftermath of Lou's life as she deals with grief, family, meeting new people etc.

At the start of the book Lou falls off of the roof of the building she is currently living in and injures herself badly but is lucky to not have died. She feels that a lot of people assume she jumped because she couldn't deal with the grief but in fact she says she heard a voice which startled her making her fall of the edge of which she was standing. When she finds out whos voice it actually turns out to be after they come knocking on her door not long after, Lou's life changes forever.

I really enjoyed this book. I felt it was so easy to read and there was never a dull moment within the book. I really enjoy Jojo Moyes writing style and her stories never fail to impress me. I absolutely love how character driven her books tend to be and find myself really diving into the world of this story.

There are a few characters of which I absolutely adored throughout this book. I of course really love Lou but sometimes she can be so frustrating to me as she's just too nice!! That's not a bad thing of course but argh. I absolutely love Sam who is a love interest in this book. I even think i enjoyed scenes with his character in the most. There was also many other side characters from a support group Lou was attending of which I really enjoyed hearing their funny jokes and ways of coping. I just found it to be very amusing and found myself laughing a lot throughout this book.

There is one very important character in this book, Lily, who I kind of had a love hate relationship with. I feel that she is a misunderstood teenager who seeks attention simly because she doesn't get it at home. Some things she did was annoying and Lou not saying much about it irritated me a whole lot more. But as Lily's character began to grow I found myself liking Lily a lot more. I think she kind of reminds me of a friend I know.

If you liked the first book, I have no doubt that you won't like this. I don't think it was as good as the first book by any means but I liked that there were more characters within this book that I found I was able to get into the heads of more.