Made You Up by Francesca Zappia : Book Review 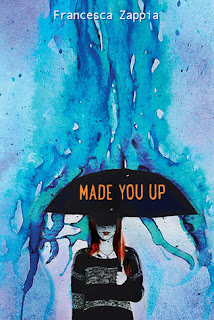 Synopsis  :  Reality, it turns out, is often not what you perceive it to be—sometimes, there really is someone out to get you. Made You Up tells the story of Alex, a high school senior unable to tell the difference between real life and delusion. This is a compelling and provoking literary debut that will appeal to fans of Wes Anderson, Silver Linings Playbook, and Liar.

Alex fights a daily battle to figure out the difference between reality and delusion. Armed with a take-no-prisoners attitude, her camera, a Magic 8-Ball, and her only ally (her little sister), Alex wages a war against her schizophrenia, determined to stay sane long enough to get into college. She’s pretty optimistic about her chances until classes begin, and she runs into Miles. Didn't she imagine him? Before she knows it, Alex is making friends, going to parties, falling in love, and experiencing all the usual rites of passage for teenagers. But Alex is used to being crazy. She’s not prepared for normal.

Funny, provoking, and ultimately moving, this debut novel featuring the quintessential unreliable narrator will have readers turning the pages and trying to figure out what is real and what is made up.

Where to even begin with this book...

I started this book not knowing anything about it (as I do with most books) and was surprised by the type of story I was reading.

This book is about a girl named Alex who has schizophrenia. She doesn't know what's real and what's not therefore making her feel somewhat unsafe sometimes. As she moves to a new school after something happening at her old school she decides to keep her condition a secret from everyone.

Although I enjoyed the whole thought process and idea of the story I didn't actually enjoy the story too much. It dragged a lot and it just reminded me of a book that was all over the place. I found myself not picking it up too often which made me annoyed as I was not reading as much as I would have liked. It took me just over 2 weeks to complete this book which made me super angry as I felt I was doing so good with previous months reading at least 4 or 5 books.

However I have also started back college and have been dedicating my time to that as well as very recently finding myself my very first job which will now put me behind a huge amount when it comes to reading.

The characters in this book I enjoyed. Most of them being your typical high school/ teenagers but Miles was the one character I really liked most. Unfortunately I could not give this book more than 2 stars as it took me a lot longer than I intended to and just wasn't captured in the plot much.

This review is a little all over the place and I apologize. I feel I haven't wrote on my blog in a very long time and am determined in get a post up hopefully once a week if I can.