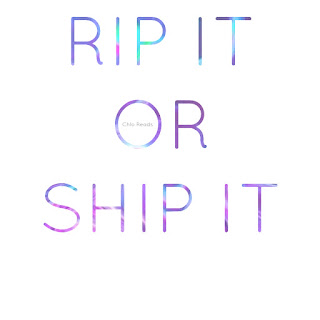 So the Rip It or Ship It tag was created by emmmabooks whereby you write down characters names from books you have read and pull two out at random. You then read the two names and decide whether you would rip them or ship them. For this I am going to be classing ship and not only friendship but relationship or any type of relationship that humanly possible haha.

You by Caroline Kepnes charcters


Shatter Me by Tahereh Mafi characters


Behind Closed Doors by B. A. Paris characters

Ship them 100%. Warner is someone I hated at first but grew to love even though I know I shouldn't and Rhysand is the same.

Hell. No. These are completely different people. Adam is a kind a quiet character whereas Rick is psychologically messed up and is the villain in the book. This pairing would not be great at all.

Lily has been through enough so placing her in any kind of relationship with Joe would just be mean. Joe is not a character you would want to pair up with anyone unless they was just like him.

I'd say these would actually be a match in regards to friends. I think they would have a lovely friendship considering Grace has been through a lot and Abby also has.

I personally don't like peach and I really like Juliette. However I think these would be kind of suited. I think Juliette would put Peach right in her place.

Ship but only friends maybe. I read the book so long ago I can't remember their relationship but I kind of prefer these to just be friends.

No No No No No! Beck has been through way too much to end up back in the same situation with another man. Jack may seem nice but hell no.