I actually found this extremely difficult to pick as most of the books I read either don't mention much about the parents in general or the parents are incredibly horrible.

Anyhow I did end up thinking of 5 different Fathers/Father Figures.

I firstly have to say that I cheated with this first one as I have not actually read the book but I have watched the film numerous times as it is one of my favourite films of all time.
Hans Hubermann is Liesel Meminger's father figure in the book The Book Thief by Markus Zusak. Their relationship from the very start is so heartwarming and throughout the story you watch them grow from being strangers to beginning to love each other and Hans Hubermann helps Liesel with her wiritng and reading skills and his love for her is so unlike anything else I've seen. Truely amazing, would highly recommend the movie if you have not seen it. Although it is quite upsetting and leaves me crying for alomost an hour after watching it haha.

Hardold in A little Life by Hanya Yanahihara is Judes Father Figure. Jude is the main character within this book and at first doesn't really understand Hardols feelings for him or undertsnad the advances in their friendship as Jude has never had a father figure in his life.

Harolds affection towards Jude is extremely heartwarming but the reailtionship between them is equally heartbreaking. This whole story will stick with me for a long time.

Marko is one of the main characters within the Saga series. I have only read Voume 1 however from the very start you can see that his child means more to him than anything and he would go to the ends of the earth to protect his family.

In the graphic novel, the complete maus, Art Spiegelman is interviewing his father about his time in world war II whereby he was a Polish Jew and a Holocaust survivor.

Although this book doesn't really show much of the relationship between Vladek and Art, I think that it is incredibly adorable how close they must have been and how much Art looked up to his father for him to have actually wanted to write this book about his father in the first place.

For anyone who has not read the complete Maus by Art Spiegelman I would highly recommend you do so. I am not a fan myself of war type books but I think due to the nature of the Holocaust and how well known and talked about it is throughout history I was intrigued to read the fact of this book in a fun graphic novel. Should definitely pick it up guys if you haven't already. 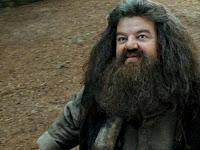 Guys, I had to cheat once more. I was stuggling so muhc to find another father figure in the books I have read so decided to go with RUbeus Hagrid from the Harry Potter series.

Lets be honest, Hagrid isn't just a father figure to Harry but also to Ron and Hermione. You can see the friendship and love between all of these characters as well as seeing that Hagrid would do anything for these three in order to keep them safe. I almost wish I kept reading these books 8 years ago but decided against it as I simply couldn't not get to the end of the first book. I think I was just more into movies back then haha.
Posted by Chloe at 08:27