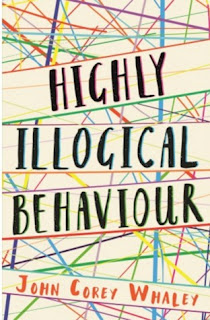 Synopsis  :  Sixteen year old Solomon has agoraphobia. He hasn't left his house in three years, which is fine by him. At home, he is the master of his own kingdom--even if his kingdom doesn't extend outside of the house.
Ambitious Lisa desperately wants to go to a top tier psychiatry program. She'll do anything to get in.
When Lisa finds out about Solomon's solitary existence, she comes up with a plan sure to net her a scholarship: befriend Solomon. Treat his condition. And write a paper on her findings. To earn Solomon's trust, Lisa begins letting him into her life, introducing him to her boyfriend Clark, and telling him her secrets. Soon, Solomon begins to open up and expand his universe. But all three teens have grown uncomfortably close, and when their facades fall down, their friendships threaten to collapse as well.

This book follows the perspective of a boy named Solomon and a girl named Lisa. Solomon has agoraphobia and hasn't left the house in three years and Lisa, an aspiring psychiatric thinks she can fix his problem whilst also helping herself. Of course things never go to plan and secrets build and friendships become complicated.

I overall did really enjoy this book. It was a fast read for me and I found the writing style super easy to read and just fun. I loved the characters and whilst reading this book I just felt I really was in the world with them.

However I only gave this a 3 stars because it didn't blow me away by any means. It was just a fun simple read that was enjoyable and needed. I did have a few problems with this book one being that some parts of this book were a little unrealistic. Well there was one part of the book that really stood out to me as being super unrealistic. It worked in the book don't get me wrong and I see how the story needed it for the book to continue however I didn't really understand how it could happen.

I don't know there were a lot of problems with this book but mainly because I just wanted more, which I guess isn't a bad thing. I would recommend this book however simply because I enjoyed it and it took me no time at all to read it.