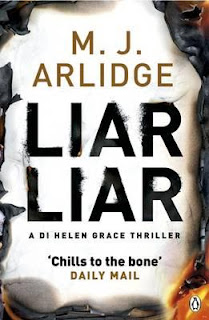 
Synopsis : Detective Helen Grace gets caught in an inferno of death and destruction in the red-hot new thriller from the author of Eeny Meeny, Pop Goes the Weasel, and The Doll’s House

Detective Helen Grace has never seen such destruction. Six fires in twenty-four hours. Two people dead. Several more injured. It’s as if someone wants to burn the city to the ground...

With the whole town on high alert, Helen and her team must sift through the rubble to find the arsonist, someone whose thirst for fire—and control—is reducing entire lives to ashes.

One misstep could mean Helen’s career—and more lives lost. And as the pressure mounts and more buildings burn, Helen’s own dark impulses threaten to consume her…

Just to clarify guys, I did really enjoy this book and although I did give it only 3 stars the only reason being is because I feel the M. J. Arlidge's other books are better than this specific one leaving me a little disappointed.

So as I just said I was actaully a little disappointed with this book. I felt it just wasn't as good a mystery as the other books in this series have been thus far. However that's not to say I didn't enjoy it or it wasn't a good novel because it is.

The characters in this book are what makes this series for me. DI Helen Grace is such a strong character as well as others in the police force such as Charlie and her family. Not only that but the suspects and victims in this book are all different and show so much personality in such little time it's great.

The one thing I love about this book (and the others) is that the chapters are so short literally only maxing to about 5 pages I feel I end up reading more than I normally would because at the end of each chapter I am hooked even more making me want to read read read!!

I personally love crime/thriller/murder mystery books and would definitely class them as my favourtie genre to read simply because they keep me hooked and wanting to turn the pages and read on so I can finally know what happens in the end. This book was no exception. Although it took me longer than what I thought to read this due to having a lot going on, I still found that when I picked this book up it was hard to put down. M. J. Arlidges writing is so incredible and his story line is likewise. The linking of different suspects to the victims and making both similarities and differences between the victims targeted is always something I find fascinating and this book plays that beautifully.

However I will say that there were a few negatives for me of course. I felt that the ending was almost a kind of 'I didn't know how to end the book' cliche for me which really bugged me but nonetheless it still worked and fitted with the story. The major issue for me was at the end of the book I felt like I still didn't understand why certain people were targeted as such. Although they tell you I think it was a little jumbled up and I felt a little let down by how the victims all linked together with the arsonist.

If you are looking for a fantastic crime story filled with suspicion and suspense then I would definitely recommenced this series thus far. This book does touch on a few issues such as strong obsession and disability but only very briefly.