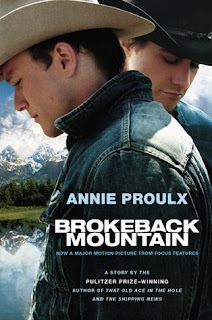 Synopsis  :  Annie Proulx has written some of the most original and brilliant short stories in contemporary literature, and for many readers and reviewers, "Brokeback Mountain" is her masterpiece.

Ennis del Mar and Jack Twist, two ranch hands, come together when they're working as sheepherder and camp tender one summer on a range above the tree line. At first, sharing an isolated tent, the attraction is casual, inevitable, but something deeper catches them that summer.
Both men work hard, marry, and have kids because that's what cowboys do. But over the course of many years and frequent separations this relationship becomes the most important thing in their lives, and they do anything they can to preserve it.
The New Yorker won the National Magazine Award for Fiction for its publication of "Brokeback Mountain," and the story was included in Prize Stories 1998: The O. Henry Awards. In gorgeous and haunting prose, Proulx limns the difficult, dangerous affair between two cowboys that survives everything but the world's violent intolerance.

I'm guessing you all know what this book is about but if not then it Basically follows to men, Ennis and Jack where they spent one summer working on Brokeback Mountain. It's about their life working there that summer working its way through year down the line.

I've been wanting to watch this film for so long and I actually didn't know it was a book until I saw someone talk about it on booktube so of course I had to pick it up before I watched the film and luckily I found it for only £2.

I really wanted to love this book more but unfortunately I just couldn't. The writing was of course more old style than I would have liked but I guess it was published in 1997 making it 18 years old as well as it being based back in a western time.

Although I say I didn't love this book that's not to say I didn't like it because I honestly did. I thought it was a quick read and I wanted to know what the future held for the two gay cowboys. This book made me feel quite emotional at the end of the book simply because of the fate that happens. I feel this book is such an important read simply because it teaches people that life is short and you should always go for what you want and be true to who you are.