Hindey's childhood was viewed as figuratively normal of it's time is what Jean Richie (Hindey's autobiographer) explains. She had a typical childhood, her family struggling for money but then so was everyone around her. She did, however, think she was a touch girl at school but nothing to the extent that seemed abnormal.


Brady's childhood was somewhat isolated as he never felt he quite fitted in with the other children. He didn't have much of a father figure either due to them days being harder to get money and as they were from a poor background his father was working a lot. But this still pretty normal for these days. Ian Brady did have a mental breakdown at the age of around 14/15 years old and he explained how he was plagued by frightening visions. Brady also got into a lot of trouble as he was involved in petty thief and began to become more alienated when he was forced to move back home. He then began to grow a rather odd yet unhealthy obsession with the Nazi's.


The Moors murders took place between 1963 and 1965 in Manchester, committed by lovers Ian Brady and Myra Hindey. The two shocked the British Public when exposed to the horrific nature of their crimes whereby 5 children were brutally murdered. The bodies were later found buried, by Hindey and Brady, at Saddleworth Moors. All except one.


The relationship between the two started 1961, when Hindey was only 18 years old and Brady 22 years old. Hindley was supposedly dominated and abused by Brady and she once said "I would always be covered in bruises and bite marks. He threatened to kill my family. He dominated me completely." However, despite the abuse, she quickly became obsessed with Brady. A diary was found where she wrote an extract about how she hoped some day he would marry her, showing how quickly she fell for Brady.

It was obvious how heavily influenced she was by him and from this she became the facilitator within the relationship, allowing anything to happen. Brady quickly began to discover how she is beginning to look like the perfect accomplice to helping him bring his fantasies to life. They started talking about things pretty small like petty crimes and she would describe it as one day they would talk about it and the next it was like they never had the conversation. However it grew faster into something a lot more dangerous from talking about the perfect robbery to finally the perfect murder.

Pauline Reade (16), July 1963 - 16 year old Pauline Reade was walking to a local dance when she was stopped by Myra who was in the car. She had persuaded Reade to get in the car offering to give her a life and then asked if she would help look for a glove she had presumably lost. Brady is following behind on a bike as they lead her up the the Moors where they Brady rapes and strangles her before they bury her body.

John Kilbride (12), November 1963 - Only 4 months later did both killers pray on their next victim. Little John Kilbride, only 12 years old, was lured by Hindey from a market in Ashton-Under-Lyne. This was a place where Kilbride was making a little extra pocket money and Hindey saw the perfect opportunity to offer him a lift home, whilst shortly after suggesting they go on a detour to the Moors using the same excuse about the glove as she previously had done. Bradly's body was not found until October 1965 and discovered he was sexually assaulted and strangled.

Keith Bennet (12), June 1964 - Walking to his grandmothers house, Keith Bennet was lured into the back of Hindley's mini pick-up by using the excuse of needing some help with unloading boxes. Brady was also in the van waiting for him to enter. Brady later told Hindley that 12 year old Keith was sexually assaulted and strangled by him. His body has to this day never been found.

Lesley Ann Downey (10), December 1964 - 10 year old Lesley Ann was abducted form a fairground by Hindley. She used the excuse again of needing help with some boxes. This sweet little girl was forced to strip and pose for photographs along with a 16 never ending minute video of her tied up pleading and begging for her life whilst saying "I want to see mommy". This video was played in front of a silenced court jury whilst the two were on trial for the murders. Her body was later found 10 October 1965.

Edward Evans (17), October 1965 - The last of the killings was a young boy named Edward Evans who was 17 years old. Whilst at a railway station, he was persuaded to go back to Brady and Hindey's house where he was brutally murdered in front of Hindley's brother-in-law, David Smith, (who also has a criminal record). Evans was stricken with 14 blows with a hacket before finally being strangled. Smith was someone Brady was hoping could be a part to his fantasy now reality but Smith being horrified to what he has just witnessed rushed home to his wife and called the police. They discovered Evans' body wrapped in a plastic sheet and the murder weapon. 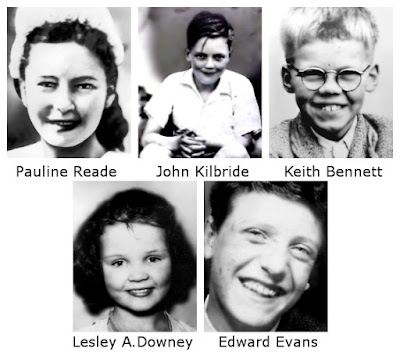