The Gentleman's Guide to Vice and Virture by Mackenzi Lee : Book Review 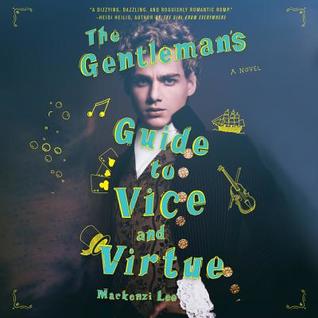 Title  :  The Gentleman's Guide to Vice and
Virture

An unforgettable tale of two friends on their Grand Tour of 18th-century Europe who stumble upon a magical artifact that leads them from Paris to Venice in a dangerous manhunt, fighting pirates, highwaymen, and their feelings for each other along the way.

Henry “Monty” Montague was born and bred to be a gentleman, but he was never one to be tamed. The finest boarding schools in England and the constant disapproval of his father haven’t been able to curb any of his roguish passions—not for gambling halls, late nights spent with a bottle of spirits, or waking up in the arms of women or men.

But as Monty embarks on his grand tour of Europe, his quest for a life filled with pleasure and vice is in danger of coming to an end. Not only does his father expect him to take over the family’s estate upon his return, but Monty is also nursing an impossible crush on his best friend and traveling companion, Percy.

Still it isn’t in Monty’s nature to give up. Even with his younger sister, Felicity, in tow, he vows to make this yearlong escapade one last hedonistic hurrah and flirt with Percy from Paris to Rome. But when one of Monty’s reckless decisions turns their trip abroad into a harrowing manhunt that spans across Europe, it calls into question everything he knows, including his relationship with the boy he adores.


Witty, romantic, and intriguing at every turn, The Gentleman’s Guide to Vice and Virtue is a sumptuous romp that explores the undeniably fine lines between friendship and love.

I put this is book is Rereadable and honestly I don't say that a lot. Like ever! I don't think rereading books is worth it because there are too many books in the world and you're never going to get around to them all so why waste time rereading a book over and over. But I wanted you guys to know how much I enjoyed this freaking book. AMAZING!!

I listened to this on audiobook and I'm not a huge fan of audiobooks but the guy who narrated it was awesome. It wasn't confusing because he know what voice were what and I was able to picture everything in my head crystal clear.

It's kind of a sad story but also funny and witty and I love that. It's also historical which I'm not a huge fan of again but this book blew me away. I want every single one of you to go out and pick up a copy or download the audiobook because I'm telling you, you will not regret it. The hype around this book? Totally worth it.
Posted by Chloe at 13:07