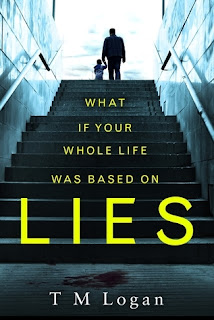 When Joe Lynch sees his wife enter an underground car park in the middle of the day, he's intrigued enough to follow her down. And when he sees her in an angry altercation with family friend Ben, he naturally goes to her defence - and doesn't for a minute believe the accusations Ben makes against her. It's pure misfortune that, just as the clash becomes violent and Ben is knocked unconscious, Joe's son has an asthma attack, and Joe has to take him to safety. It's just that, when Joe comes back to check Ben's OK, he's disappeared. And that's when Joe receives the first message.

This book could have been a quick read for sure, I was just too lazy.

This book is told from the perspective of the main character, Joe, as we follow the mystery that follows what he witnesses' and encounters one Thursday night.

When I first started reading this book I was kind of like hmm okay where's this going to go. Then as I got deeper and deeper into it I started to really fall into the whole mystery side of it and found myself questioning what was going to happen. The outcome at the end was not what I expected at all. Don't get me wrong, a side of it I could 100% see but I think the author was clever with how they mislead you, just like Joe.

I only gave this a 3 stars because it didn't blow me anyway. I enjoyed it of course but it wasn't anything special. I'd love to know if any of you guys have read it though because I've not seen anyone speak about it at all. It was a cheap buy I found on Ibooks and decided to download it so it was a kind of in the moment thing.
Posted by Chloe at 13:52