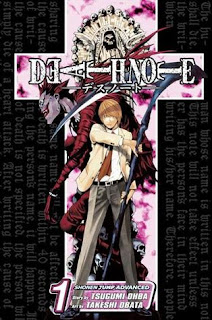 
Synopsis  :  Light Yagami is an ace student with great prospects - and he's bored out of his mind. But all that changes when he finds the Death Note, a notebook dropped by a rogue Shinigami, a death god. Any human whose name is written in the notebook dies, and now Light has vowed to use the power of the Death Note to rid the world of evil. But when criminals begin dropping dead, the authorities send the legendary detective L to track down the killer. With L hot on his heels, will Light lose sight of his noble goal...or his life?

Boredom
Light tests the boundaries of the Death Note's powers as L and the police begin to close in. Luckily Light's father is the head of the Japanese National Police Agency and leaves vital information about the case lying around the house. With access to his father's files, Light can keep one step ahead of the authorities. But who is the strange man following him, and how can Light guard against enemies whose names he doesn't know?

This book follows a young boy named Light who one day comes across a book that's labelled 'death note' which was dropped by a Shinigami, a death god. The book is basically used to kill people by writing their name in it. Light decided to use the book for good and to rid the world of evil. However this obviously becomes suspicious and Light finds himself being hunted by 'L' who is working with detectives in order to find out who is behind these mysterious deaths.

I really enjoyed this manga. It was the first manga in which I have ever owned and read. I aint gonna like guys, I found it a little difficult to grasp the whole reading backwards thing I kind of found myself not knowing where I had to start but obviously like anything, I got the hang of it. Probably should have read the book on how to read mangas before actually getting straight into it but I couldn't wait.

I thought this book was something like nothing else I've read before. I really enjoyed the plot line and also the graphic elements of it. The drawings were amazing and the Shinigami was so creepy yet super cool I loved it. I always find it hard to connect with characters in graphic novels because it's all dialogue but it didn't bother me with this book. I just found it super easy to read and super fast too.

I can't wait to read the next 11 books in this series. Let me know if you've also read this book/series and what you thought of it. Would definitely recommenced if you're into graphic novels/manga's or if you're looking for a quick fun read.