A Little Something Different by Sandy Hall : Book Review 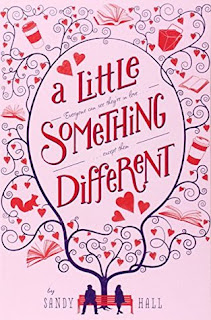 Title  :  A Little Something Different

Synopsis  :  The creative writing teacher, the delivery guy, the local Starbucks baristas, his best friend, her roommate, and the squirrel in the park all have one thing in common—they believe that Gabe and Lea should get together. Lea and Gabe are in the same creative writing class. They get the same pop culture references, order the same Chinese food, and hang out in the same places. Unfortunately, Lea is reserved, Gabe has issues, and despite their initial mutual crush, it looks like they are never going to work things out.  But somehow even when nothing is going on, something is happening between them, and everyone can see it. Their creative writing teacher pushes them together. The baristas at Starbucks watch their relationship like a TV show. Their bus driver tells his wife about them. The waitress at the diner automatically seats them together. Even the squirrel who lives on the college green believes in their relationship.


Surely Gabe and Lea will figure out that they are ment to be together...

This book was okay. I didn't exactly love it but I didn't hate it either. It was kind of just meh you know?

This book follows 14 different perspectives (of which I found intriguing and fascinating) that witness a friendship/relationship form between two young people. The 14 perspectives vary from a bus driver to the friends of the young people and there are some weird characters such as a squirrels perspective that is also included among some other weird and wonderful people.

I thought this book was written in such a god and creative way. I always love a book written from different perspectives and what made it even better, each person didn't have pages upon pages to read it was short and brief yet enough to get to know the characters.

However I did have a few problems with this book. To start with the dialogue in this book was not how I know people of my the characters ages to speak today. I don't know if that was done intentionally or not but it kind of seemed a little formal to me. I also don't feel like the characters in this book didn't really seem to have different personalities. Not to say what was going on wasn't adorable because it was but it did get a little frustrating not knowing what Gabe and Lea were thinking and feeling themselves. I always like to have the perspective of the main characters in the book and this is why the book didn't meet my standards.

The romance was cute though and the people were okay. It was an easy and quick read so no regrets.