This Is Where It Ends by Marieke Nijkamp : Book Review 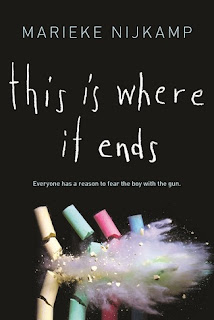 Title  :  This Is Where It Ends

Synopsis  :  10:00 a.m. The principal of Opportunity High School finishes her speech, welcoming the entire student body to a new semester and encouraging them to excel and achieve.

10:02 a.m. The students get up to leave the auditorium for their next class.

Told from four different perspectives over the span of fifty-four harrowing minutes, terror reigns as one student’s calculated revenge turns into the ultimate game of survival.

So to say the least I actually really enjoyed this book.

This Is Where It Ends is a book about a shooting that takes places in a school auditorium and the whole book is told over a time span of 54 minutes. It is told from 4 different perspectives of which all tie in together with the story. I found this super interesting and I just really enjoyed it. The four different perspectives are 3 girls and 1 boy who are all pretty different but kind of the same.

Each chapter has a little chunk of what each person is doing at that time interval. I found this to be a lot nicer to read than to have it change perspective between each chapter as I found I flew through the book  a lot faster than I would normally have done.

If you have thought about picking this book up before or have/are interested in doing so I suggest you do. It's a short book and definitely shouldn't take you much time to read at all.