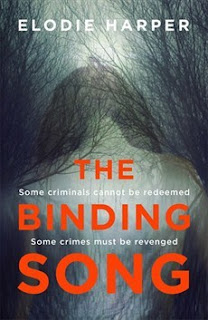 
Dr Janet Palmer is the new lead psychologist at HMP Halvergate in a remote, bleak area of Norfolk. At first, she was excited by the promotion. Then she starts to see how many secrets are hiding behind the high walls.

A string of inmates have committed suicide, leaving no reasons why, and her predecessor has disappeared - along with his notes. The staff are hostile, the threat of violence is ever-present, and there are rumours of an eyeless woman stalking the corridors, punishing the inmates for their sins.

Janet is determined to find out what is really going on. But the longer she stays and the deeper she digs, the more uncertain she feels.Halvergate is haunted by something. But it may be a terror worse than ghosts...

Disclaimer : I received this book as per my request from Hodder and Stoughton, so a huge thank you to them. This review will in no way be biased and is 100% my own opinion.


This book follows a woman named Janet who begins her new job at Halvergate Prison. She is the new psychologist for sex offenders within this prison but soon finds out something strange is going on. This book follows a Third POV through unravelling this mystery that's taking over the prison.

First off I want to say that I really freaking enjoyed this book. I know it's a short book and most people could probably read this within a day or two but it did take me a little longer purely because it was so creepy and as I am a night reader it did kind of shake me up. Maybe that's me being a little of a wimp but I live for it haha.

I will say I'm not a huge fan of Point Of Views that are third person simply because I don't feel I can connect with the characters that much and again this book I still felt that but nowhere near as much as I usually do. This book was super interesting and got me so interested in Janets life as well as getting to know one of the sex offenders a little more (michael) and also Steven. These were all great characters. As much as I hated Michael, I loved him too. His character was pretty great and I think his part was well played.

I also loved how this book had mini flashbacks throughout which went back to Janet's life when she was a lot younger. There weren't too many so it was overpowering, there were just the right amount which was nice.

The only thing I was a little disappointed with was the ending. I was expecting it so that's great but I think it was a little sloppy. This book does deal with religion as well as slight touching on Greek mythology which was kind of cool. However I would have liked a better ending. Never the less a great book and if I saw this on the shelf I would definitely pick it up. I mean that cover looks so spooky how could you not?
Posted by Chloe at 06:34