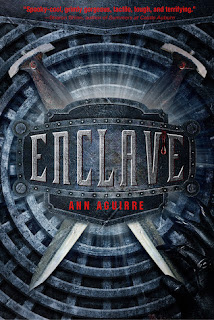 Synopsis  :  New York City has been decimated by war and plague, and most of civilization has migrated to underground enclaves, where life expectancy is no more than the early 20's. When Deuce turns 15, she takes on her role as a Huntress, and is paired with Fade, a teenage Hunter who lived Topside as a young boy. When she and Fade discover that the neighboring enclave has been decimated by the tunnel monsters--or Freaks--who seem to be growing more organized, the elders refuse to listen to warnings. And when Deuce and Fade are exiled from the enclave, the girl born in darkness must survive in daylight--guided by Fade's long-ago memories--in the ruins of a city whose population has dwindled to a few dangerous gangs.

Ann Aguirre's thrilling young adult novel is the story of two young people in an apocalyptic world--facing dangers, and feelings, unlike any they've ever known.

Unfortunately, I didn't enjoy this book that much. There were a few element that I did enjoy and what not but mostly it was just like a bad version of Shatter Me.

This book is basically about a girl named deuce who has always wanted to be a huntress and protect her enclave from the 'zombies' who are attacking the different enclaves underground. The young girl and her hunter partner Fade face difficult situations throughout the story in order to find safety for themselves.

I personally felt that the character development within this book was so poor. I felt I didn't really connect to any of them and as the book was told in the perspective on the young girl Deuce, I felt as though she was a little too obsessed with being a huntress. I found it quite annoying how she wouldn't really point out much about a person other than their skills to survive whether what they say is a 'hunter thing to say'. She was basically labeling people as either a hunter or a breeder and it was just so frustrating to read.

I didn't really like the world that much I thought it was boring and not a lot going on. I just thought that basically it could have been a lot better than what it was.

I probably could have given this book a 1 star however I didn't because there were one or two things I did enjoy about this book. I also thought that due to me reading this through a slumpy time I should maybe cut it some slack as of course reading when you're in a reading slump is bound to effect your rating right?