I haven't read these books before and it's been a very very long time since I last saw the movie which in all fairness I really did enjoy before and I guess it's the same with this book.
It was a super fun and exciting read. I enjoyed it so much from start to end and as I was reading I could remember some bit of the movie as I was going along. 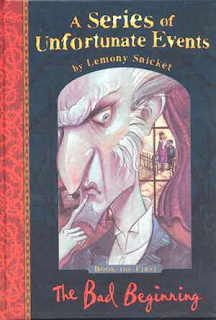 This is the first book out of the 'A series of unfortunate events' series by Lemony Snicket which follows three orphans from the Baudelaire family of which were very rich. The orphans consist of 2 girls and 1 boy altogether. Sunny being the youngest and loves biting things and Violet being the eldest who is into inventions, leaving Klaus (the only boy) being the middle child who throughout enjoys reading. This book looks into the adventure of these 3 siblings and how their lives as orphans lead to a variety of unfortunate events along the way.

I personally love the characters of this book especially Klaus and Violet. There were some characters which kind of annoyed me such as Mr. Poe as he did not do anything to help the children as such but nonetheless he's a great character. I also think that now as I am older the book is actually quite humorous to me which I liked.

I also liked the writing style of the book and how it was narrated all the way through. I'm not usually a fan of anything other than first person perspectives but I actually really enjoyed this format for this particular story.

The reason as to why I've started reading this series is because I've heard they're coming out with a netflix series on these books and I really wanted to get through the books first before it came out (I hope it actually does now haha). I had the first book here from when my sister was younger so I have it (she doesn't read guys) and then decided to just buy the complete series and sell or giveaway the first book copy I already have because there's no point in me having two you know.

Anyway as I was saying... I really liked this book, I didn't give it anymore than a 3 star rating as I didn't feel it blew me away or anything, it was just fun and an easy read.